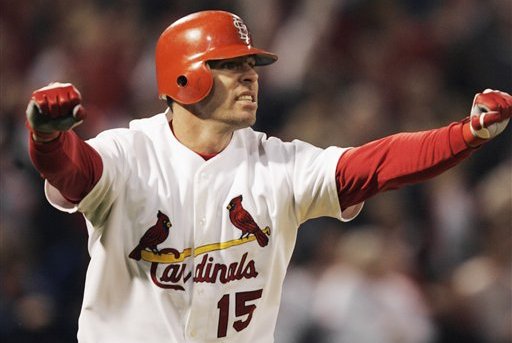 March 23, 2020 marks the twentieth anniversary of the Cardinals-Angels trade that brought Jimmy Ballgame to St. Louis and sent Kent Bottenfield and Adam Kennedy to the Angels. Now forget for a moment how old you feel upon hearing that and think about the change in St. Louis following this trade. There are not a lot of trades that have this kind of impact. The year 2000 marked the beginning of a great run of Cardinals baseball; and Jim Edmonds was a huge part of that success during his tenure with the Cardinals (which ended in a trade in December 2007); with a 6.3 WAR 2000 campaign to lead the Cardinals back to the NLCS for the first of five LCS appearances during Edmonds' tenure. He became a key part of the MV3 with Pujols and Rolen that helped the Cardinals dominate the Central Division with three consecutive trips to the NLCS; two World Series visits and one championship. Edmonds won six gold gloves as the Cardinals starting Center Fielder and seemed to catch everything. Just by memory I can think of multiple clutch hits and big home runs. One of my favorites was a bomb he hit off Zambrano at Wrigley a couple innings after getting plunked. He soaked it in as the ball sailed out of the park and it was awesome. As a Cardinal fan watching the team during those years; he was a lot of fun to watch play.

How do the Angels feel about the trade? You can read about that here on an Angels fan blog; but needless to say they are not all that happy even today when they think back to that trade. They did pick up a solid player in Kennedy at 2B; but Bottenfield was a complete bust and did not last a full season for the Halos.

Added to the success on the field that Edmonds brought as a player; when his time in St. Louis drew to a close; he brought future 2011 World Series legend home to St. Louis in a trade to the Padres; making the impact of that trade from 20 years ago to be felt in two World Championships.

Edmonds is now a Cardinals Hall of Famer and joins Dan McLaughlin in the booth regularly for commentary during baseball games(when the season isn't shutdown due to plague that is). I personally enjoy his perspective from the booth as a hitter and fielder compared to most of the commentary we have heard over the years mostly from former pitchers.

What do you remember about Jim Edmonds as a player? What are your thoughts on the impact this trade had on the Cardinals franchise?
Tags:
Edmonds-Trade-Success
Top

I'll also add that when he's in the booth, I actually appreciate his insight into what the pitchers are doing as much as what the batters are thinking. That's truly unique. A top hitter's mentality as it applies to watching pitchers. Pure Gold.
Top

Watching him turn on a high fastball is one of the prettiest things ever.
Top

If anyone hasn't read it, this Fangraphs post from a few years back is really good:

I loved watching him play that short CF. His ability to go back on fly balls has to be one of the best ever, and playing shallow allowed him to catch more bloops and limit extra bases, and probably to throw more people out too. And he did all that without being the fastest player at CF, too (although maybe his first couple steps were extremely fast)
Top

GD do I feel old or what?
Top

So say we all.
Top

So say we all.

When the Cardinals first got him, I remember him saying 'I want to see that sea of red.'

Well, he saw it and it was love at first sight.
Top
Post Reply
27 posts