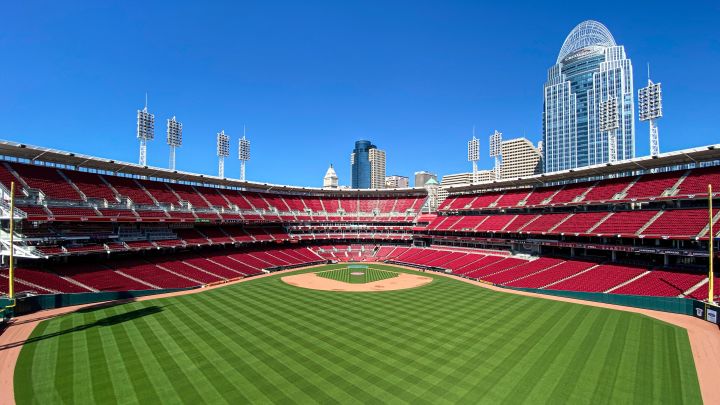 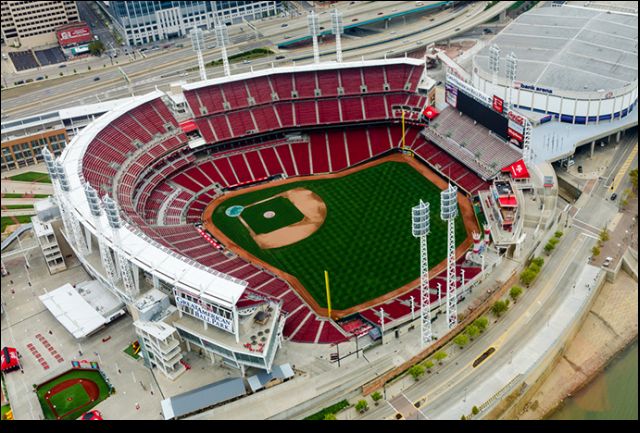 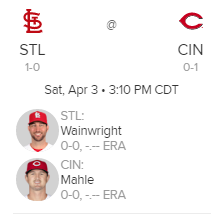 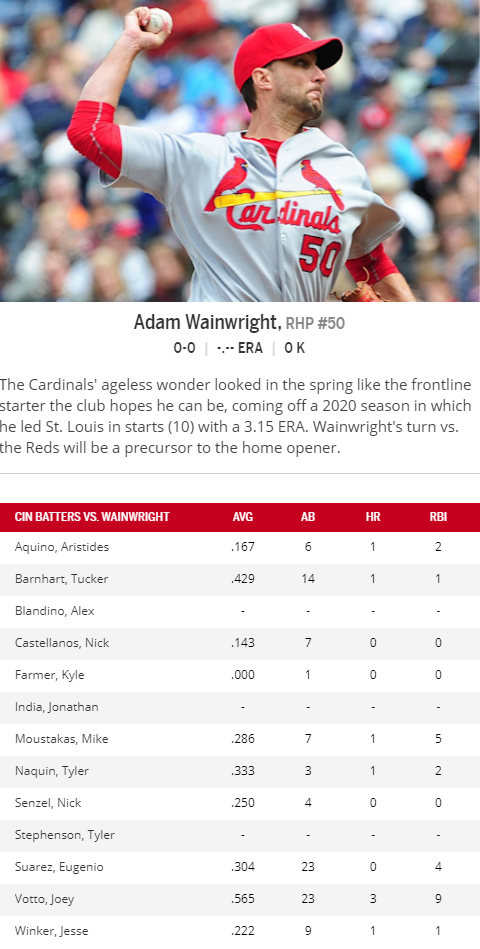 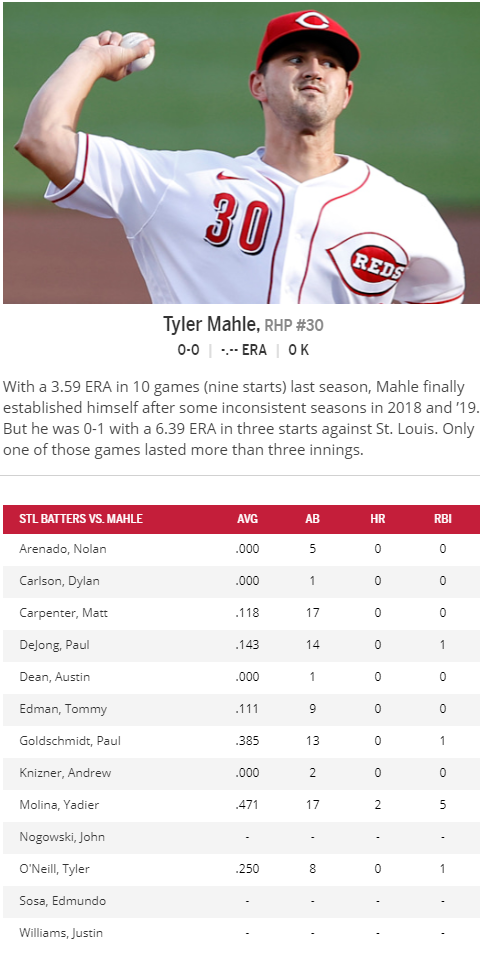 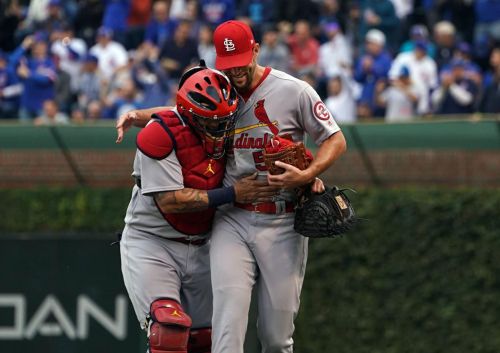 Wainwright will be embarking on his 16th season in a Cardinals uniform. What’s more, he and batterymate Molina are chasing history, just 33 starts behind sole possession of third all-time in regular-season starter-catcher batteries, according to the Elias Sports Bureau. Though almost everything has to go right to hit that mark, they can rest assured they need just 10 starts to pass Don Drysdale and Johnny Roseboro for fourth all-time. 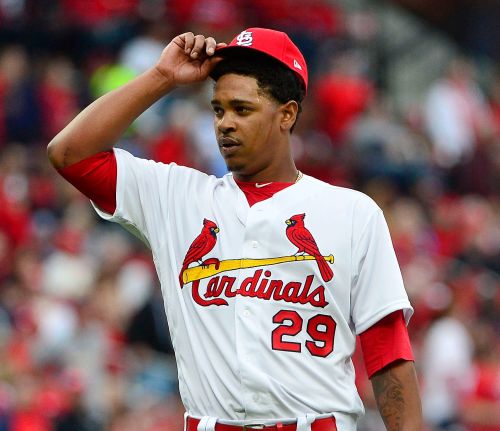 Manager Mike Shildt said that he "wouldn't be surprised" if right-hander Alex Reyes is the pitcher who will be getting the bulk of chances in the eighth and ninth innings -- or bits of both.

“He's got everything you'd want to have in a guy that can be in that spot,” Shildt said. “So it's his opportunity.”

Reyes delivered a scoreless ninth during the Cardinals' 11-6 win in their season opener, working around one hit and one walk.

The uber-talented former top prospect has been kept out of the rotation this season and limited to 100 innings, citing workload concerns and with an eye towards the 2022 rotation. Reyes found himself starting games last season -- and then closing them by the time the postseason rolled around.

What’s more, Reyes is coming off of a dynamite spring, having retiring the first 15 of 17 batters that he faced en route to 10 strikeouts across 7 2/3 innings, pitching towards the end of several Grapefruit League games. 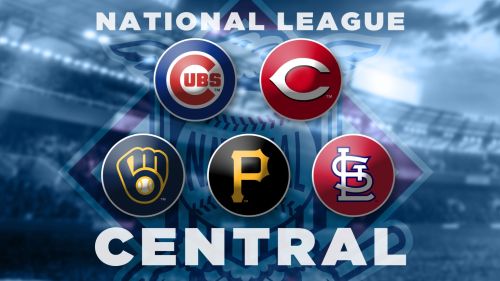 Advantage, Cardinals? Or is it the Cubs? Or might the Brewers benefit from getting the toughest part of their schedule out of the way early?

There’s no easing into the regular season for the Brewers, who play more than half of their games through May 2 against reigning division champions in the Twins, Cubs (nine games) and Dodgers, and also catch 2020 playoff teams in the Cardinals, Padres and Marlins. The only non-playoff team in that span is Pittsburgh, which visits American Family Field from April 16-18. The Brewers do have the benefit of playing the majority of games at home, where they think left-handed hitting newcomers Kolten Wong and Jackie Bradley Jr. could get a power boost in 2021.

The ailing Cardinals can find some respite in the fact that they open the year with one of the easier schedules on paper, and boy could they use it. Without two-fifths of their rotation healthy, the Cards will open the season with three games at the Reds and then three at the Marlins -- a pair of teams projections are low on -- before opening at home against old friend Kolten Wong and the Brewers and then meeting intriguing NL East foes in the Nationals and Phillies.

A fast start is important for the Cubs this season not only to show they can keep their division crown, but for the front office to evaluate how to handle the Trade Deadline. April provides a great opportunity with six of the first nine games against the Pirates. That said, the Braves, Brewers and Mets (19 games combined) will present formidable foes and a good early litmus test

If the Pirates want to prove they can exceed their meager projections, they’re going to have to prove it early. The club opens its season with the vast majority of its games against opponents with winning records in 2020, including six games against the 2020 NL Central champion Cubs. Pittsburgh will benefit from five scheduled off-days in the first month, but the team will have to play well away from home, with 15 of its 27 games on the road.

Little is easy for the Reds during the first month of the season. They open against a division powerhouse in the Cardinals and have not one, but two, West Coast road trips. More than half of their games are against teams that made the playoffs in 2020. They enter 2021 missing two members of the rotation in Sonny Gray and Michael Lorenzen, while outfielder Shogo Akiyama will also open the season on the IL. A fast start is always welcome but it could be a real boost for Cincinnati to weather its issues and come out strong.

Left-hander Kwang Hyun Kim (back tightness) remains in Jupiter, Fla., for rehab, where he faced live hitters Thursday. He threw 51 pitches for 11 outs -- or 4 2/3 innings -- according to Shildt, with nine outs recorded by strikeout. Next up for the Cards' starter is a bullpen session and one more time facing live hitters in an extended setting, and then “kind of a, 'Here we go' kind of thing,” Shildt said, with Kim's return expected by mid-April.

Harrison Bader (right forearm soreness) will make the trip to the alternate training site in Sauget, Ill., from Jupiter this weekend to continue rehab with his physical therapist, Cardinals assistant director of performance Thomas Knox. Miles Mikolas (right shoulder soreness) is also expected to face live hitters at the alternate training site soon. Both are slated for late April/early May returns.

A mere 9 hours away.
Top

My dog wakes me up at 5am. There needs to be some 5 am baseball.
Top

I am going for breakfast; meet me at the diner if you want.
Top

That A.S.S. is dubious. Jonathan India has a 100% chance of having a big game and therefore the Reds have a 61% chance of winning? So arbitrary.
Top
Post Reply
105 posts