I was in Tacoma last Friday and I wish I had known that the Redbirds were coming through; I would have pushed things back a week.

That restaurant is also right by Stadium High School where Ten Things I Hate About You was filmed where I snapped this photo last week. 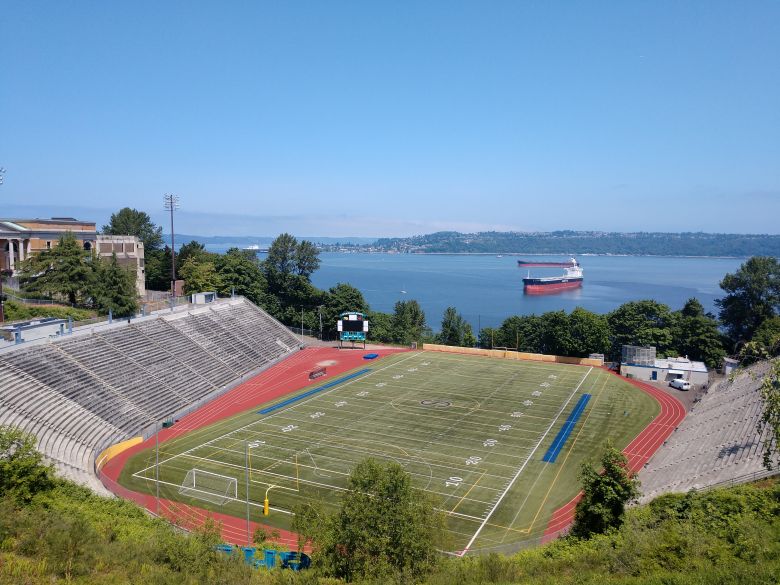 
The Memphis Redbirds (24-36) opened the contest by scoring in the first inning against the Tacoma Rainiers (Mariners) for the second straight night in Tacoma, Wash., but the Rainiers scored seven times in the bottom half and never looked back in their 10-4 win over the Redbirds.

Adolis Garcia drove in Rangel Ravelo with a two-out single in the opening frame to give the Redbirds an early 1-0 lead, but the Rainiers (30-30) responded with seven runs their first time up, all with two outs, knocking Memphis starter Anthony Shew out of the contest after just 0.2 innings of work.

Jose Godoy notched his first career Triple-A hit, a two-run blast to right, but Redbird bats went silent the rest of the night, scoring just one more run over the final seven innings.

Godoy ended his night going 2-for-3 with two RBI and walk.

Chris Ellis made his longest relief outing of the season, tossing 3.0 scoreless frames, allowing two hits while striking out three and issuing two walks. Chasen Shreve also had a scoreless appearance out of the bullpen, tossing 2.1 shutout innings and allowing just a single batter to reach.

Six of the nine Redbird batters recorded a hit in the contest, but Tyler O'Neill was the only other batter besides Godoy to have multiple hits.


The Tulsa Drillers (32-26) completed the series sweep with a 4-1 win against the Springfield Cardinals (23-36) at ONEOK Field on Wednesday afternoon.

MOMENTS THAT MATTERED:
-Tulsa CF DJ Peters broke the scoreless tie with a two-out, two-run home run in the bottom of the third inning, swinging the Drillers into the 2-0 lead.

-The Cardinals cut the deficit in half, 2-1, when 1B Zach Kirtley belted a solo home run to start the fourth inning, his first home run in Double-A.

-The Drillers added a pair of insurance runs in the seventh with an RBI walk from Peters and a run-scoring wild pitch, opening their lead to 4-1.

-LHP Austin Warner allowed only two runs in 6.0 innings, marking his sixth straight outing of at least 6.0 frames and his fifth quality start overall this season.

-RHP Connor Jones tossed a 1-2-3 eighth inning out of the bullpen.

Fagalde (6-3) allowed four hits while striking out five and walking one to pick up the win.

Palm Beach got on the board first with a run in the third inning. After being hit with a pitch, Justin Toerner advanced to third on a double by Luken Baker and then scored on a double by Baker.


Continuing their strong offense from Tuesday night, the Peoria Chiefs defeated the Quad Cities River Bandits 6-2 Wednesday night while playing as the road team at Dozer Park. The Chiefs improve to 26-31 on the season with the series finale set for Thursday at 6:35 p.m.

The Chiefs drew first blood in the top of the second against River Bandits starter Jose Alberto Rivera. After his 4-for-4 performance Tuesday, Juan Yepez continued his hot hitting with a leadoff double. He scored from second on a double from Bryce Denton to put the Chiefs ahead 1-0. Brandon Benson reached on a throwing error by Quad Cities catcher Orlando Marquez and Wadye Ynfante hit a solid single to load the bases. Brendan Donovan knocked a single to right field to score Denton and Benson to push the Chiefs lead to 3-0 and Ynfante scored on a wild pitch for the 4-0 lead.

Peoria added a run to their lead in the top of the fourth. Benson, who also returned to the Chiefs on Tuesday, led off the inning with his first homerun of the season to increase the lead to 5-0.

The Chiefs extended their lead in the top of the sixth against River Bandits reliever Matt Ruppenthal. Ynfante doubled with one out, Donovan walked and Delvin Perez singled to load the bases. Nolan Gorman ripped a single to right to extend his hit streak to 10 games as Ynfante scored to increase the Chiefs lead to 6-0.

The River Bandits ended the Chiefs shutout with a run against Mike Brettell in the sixth. They added another run in the ninth on a groundout against newcomer Parker Kelly.

CardsofSTL wrote:That restaurant is also right by Stadium High School where Ten Things I Hate About You was filmed where I snapped this photo last week.

Nice! Yeah when I bought a new lens down there last week, I took some pictures of it too. I wonder if we crossed paths?

But yeah, looking forward to the game. Mariners have some good talent in AAA as well.
Top

CardsofSTL wrote:That restaurant is also right by Stadium High School where Ten Things I Hate About You was filmed where I snapped this photo last week.

Nice! Yeah when I bought a new lens down there last week, I took some pictures of it too. I wonder if we crossed paths?

I ran into some weirdos; so probably. 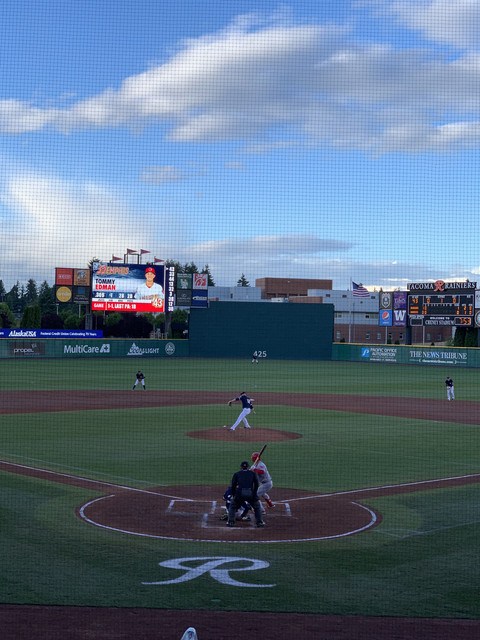 No view of Rainier?

Too cloudy. And not really.

Hiking on it tomorrow though.
Top


The Memphis Redbirds (25-36) captured a series win at the Tacoma Rainiers (Mariners) after a 7-0 victory in the series finale Thursday night in Tacoma, Wash.

Six of Memphis' 11 hits went for extra bases. Edmundo Sosa and Jose Godoy each had three hits for the Redbirds, who turned a 2-0 lead after six innings into a 7-0 advantage after the top of the eighth.

In addition to Sosa and Godoy's three-hit games, Drew Robinson was 2-for-5 with a double and two RBI. Sosa also tripled in addition to his home run and double.

Tommy Edman swiped two bases in the game, giving him nine for the season, after singling and drawing a walk.

Adolis Garcia had an outfield assist at second base, and the Redbirds turned two double plays in the contest against Tacoma (30-31).


Brady Policelli hit a two-run homer in the seventh inning, leading the Lakeland Flying Tigers to a 4-1 win over the Palm Beach Cardinals on Thursday.

The home run by Policelli scored Brock Deatherage to give the Flying Tigers a 3-1 lead.

The Flying Tigers tacked on another run in the eighth when Jon Rosoff hit a solo home run.


Despite a strong effort from the pitching staff, the Peoria Chiefs fell to the Quad Cities River Bandits 1-0 Thursday night while playing as the road team at Dozer Park. The Chiefs fall to 26-32 on the season and welcome in the Cedar Rapids Kernels Friday at 6:35 p.m.

The River Bandits walked off with the win in the ninth against Chiefs' pitcher Freddy Pacheco. After a lead-off walk to Reuben Castro, David Hensley doubled to the gap in left-center to end the game.

Brendan Donovan bunted for a hit in the top of the first inning, but the Chiefs were unable to record another hit. They did not have a baserunner after Brandon Riley walked with one out in the second inning.

Kyle Leahy got a no-decision, as he threw five shutout innings, allowing two hits, one walk, while striking out one. Leahy has not allowed a run his last thirteen innings of work. Sebastian Tabata pitched a clean sixth inning, allowing only a walk in one inning of work. Franyel Casadilla allowed one hit in a shutout inning. Pacheco (0-2) took the loss as he allowed one run on one hit. He walked one and struck out two.