The St. Louis Cardinals set up their rotation to have their three best starters go in this three-game set against the Cincinnati Reds in a matchup of the top teams in the NL Central.

The plan has worked through one game.

The Cardinals will send Jaime Garcia to the mound Tuesday night at Great American Ball Park and can move into a virtual tie atop the division with a victory over the Reds, who counter with ace Johnny Cueto.

St. Louis (62-49) used Skip Schumaker’s first career grand slam as part of a seven-run fourth inning Monday, and that cushion was more than enough for its ace. Chris Carpenter cruised through seven innings in a 7-3 victory that pulled the Cardinals within one game of the Reds (64-49).

“That’s the first time it’s happened in my career,” said Schumaker about his grand slam. “Everyone gets lucky once in a while. I probably hit it in the right park.”

Carpenter has won his last nine starts against the Reds, a streak that started in 2006.

A victory Tuesday would pull St. Louis even in terms of games, and give the Cardinals a better winning percentage than the Reds.

The rotation has been juggled with Garcia (9-5, 2.53 ERA) following Carpenter, and 16-game winner Adam Wainwright pitching Wednesday afternoon. The Cardinals are 46-24 in games started by Carpenter, Garcia and Wainwright for the best mark by any three qualifying pitchers on one team in the majors.

Garcia beat the Reds twice in May, posting a 2.92 ERA with left-handed hitters Joey Votto and Jay Bruce combining for eight hitless at-bats against him.

The rookie left-hander enters after an ugly outing last Tuesday against Houston. He allowed a career-high eight runs - four earned - over five-plus innings in an 18-4 loss.

The right-hander went 3-0 with a 2.39 ERA over five starts against the Cardinals before allowing a season-high eight runs over five-plus innings and not receiving a decision in a 9-8 victory June 1.

Albert Pujols, who is 19 for 40 with five homers and 12 RBIs during a nine-game hitting streak, is 3 for 14 with no homers in his career against Cueto.

Cueto is 5-0 with a 3.58 ERA in his last eight home starts. He matched a career high with his 11th victory Wednesday, yielding one run in six innings of a 9-4 win at Pittsburgh.

The Reds lost for the third time in 12 games. Votto, Scott Rolen and Jim Edmonds - acquired Monday in a trade with Milwaukee - combined to go 1 for 10. 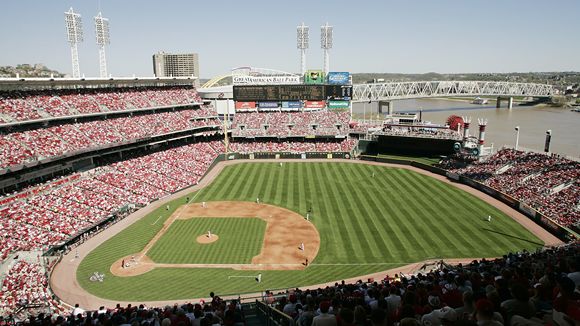 CINCINNATI (AP) -- Skip Schumaker hit his first career grand slam during St. Louis Cardinals' biggest inning of the season, supplying more than enough runs for right-hander Chris Carpenter to beat the Cincinnati Reds for the ninth time in a row, 7-3 on Monday night.

The Cardinals provided a lopsided start to their showdown for first place in the NL Central, trimming Cincinnati's lead to one game.

St. Louis sent 12 batters to the plate for seven runs in the fourth, giving rookie Mike Leake (7-4) his worst moments in the majors. Schumaker's grand slam - only his 19th career homer - made it 6-0.

Carpenter (13-3) has won his last nine starts against the Reds, a streak that started in 2006. He gave up five hits and a pair of runs in seven innings.

Ramon Hernandez had three of Cincinnati's seven hits, including an RBI double off Carpenter and a solo homer off Kyle McClellan .

The crowd of 36,353 was revved for one of the most meaningful series in Great American Ball Park's eight-year history. The Reds haven't been in first place so late in a season since 1999, when they were playing at Cinergy Field.

The Cardinals left the fans silently sweating in their seats.

The teams have been locked in a back-and-forth race since mid-May, never separated by more than three games since then. St. Louis leads the season series 8-5. They meet only one more time, for a three-game series in St. Louis from Sept. 3-5.

St. Louis has its top three pitchers set to start against the Reds during their showdown series - Carpenter, Jaime Garcia and Adam Wainwright . The Reds opened with a rookie.

For one of the few times, Leake looked like one.

St. Louis opened the fourth with six consecutive hits. The clincher came from Schumaker, who hadn't played since Wednesday because of a sore left wrist. His grand slam landed next to the Reds' bullpen in center and got Leake uncharacteristically flummoxed.

Leake even lost track of outs. He fanned Brendan Ryan for the second out in the fourth, then started jogging off the field. He realized his mistake just before reaching the foul line, turned around and gave up a single by Felipe Lopez . Manager Dusty Baker decided that was enough.

In his last two starts, Leake has given up 14 runs (six earned) and 15 hits in 8 2-3 innings. He sat in the dugout with sweaty hair stuck to the side of his forehand and a faraway expression in his eyes.

Carpenter had his way with the big lead, extending his streak of dominating an offense that leads the NL in batting, runs and hits. The right-hander beat the Reds four times last season, and now has beaten them four times already this season.

The Reds brought in another ex-Cardinal before the game, adding outfielder Jim Edmonds through a trade with Milwaukee. Edmonds played for Reds general manager Walt Jocketty in St. Louis. Edmonds started in center and went 0 for 4 with a strikeout.

NOTES: Carpenter is 4-0 in six starts since the All-Star break with a 1.79 ERA. ... Albert Pujols extended his hitting streak to nine games. He also walked for the first time in 12 games. ... Reds RHP Aaron Harang plans to throw a simulate game on Tuesday, then start a rehab assignment in the minors. Harang has been in the disabled list since July 6 with lower back spasms. ... The Reds optioned LHP Travis Wood to Triple-A to create a spot for Edmonds. Wood was going to miss his turn in the rotation because of two days off in the next week.

St. Louis Cardinals' Matt Holliday, left, is forced out at second base as Cincinnati Reds shortstop Paul Janish, right, throws to first base to complete a double play in the second inning of a baseball game Monday, August 9, 2010 in Cincinnati. (AP Photo/David Kohl)

Cincinnati Reds outfielder Jim Edmonds, left, talks with Reds general manager Walt Jocketty, right, during batting practice before a baseball game against the St. Louis Cardinals, Monday, Aug. 9, 2010 in Cincinnati. The Reds got Edmonds from the Milwaukee Brewers in a trade for Chris Dickerson on Monday, strengthening their outfield for a playoff run. (AP Photo/David Kohl)

Saint Louis Cardinals' Felipe Lopez is safe at third as Cincinnati Reds' attempts the tag after Lopez stole second, and advanced to third on a loose ball during the fourth inning.The Enquirer/Gary Landers

Saint Louis Cardinals' Matt Holliday, below, is safe at third on a single by teammate Yadier Molina, as Cincinnati Reds Scott Rilen looks for the throw during the fourth inning. The Umpire is Jeff Kellogg.The Enquirer/Gary Landers


The Cardinals are 46-24 in games started by Carpenter, Garcia and Wainwright for the best mark by any three qualifying pitchers on one team in the majors.

Wow. Two things to take from that...those three are good...and...LOL and WTF are [expletive] the bed this year.


Albert Pujols is 19 for 40 with five homers and 12 RBIs during a nine-game hitting streak.


Votto, Scott Rolen and Jim Edmonds - acquired Monday in a trade with Milwaukee - combined to go 1 for 10.

I really don't lump Jimmy in with Scott and Votto this year, but that's a definite recipe for success...please do what Carp did Jaime (minus the chewing out of Ryan)!

Lastly...I hope the Cardinals crush the Reds into oblivion...but I'd be just as happy about a 1-0 victory as I would about an 11-0 victory.
Top

out of all match ups this series, this easily is the game we're most likely to lose, so to get a great performance from Jaime and finally get to Cueto would be huge
Top

A six plus inning start from Jaime would be really nice about now.
Top

It seems like Jaime has performed well in a few "pressure" games that we've had in the past, when he's gone up against tough starters on the other club. He gets another here.

I was going to write that it seems like Jaime has been struggling lately, but he really hasn't. He's got a 3.21 era in July and 1 start in August. Two of those have been aborted starts, including last outing where he gave up 8 runs (4 earned) and a couple starts ago where he got an early hook. Hopefully he has one more great outing in him and then I might consider skipping him. He's getting really close to the "wall".
Top

AWvsCBsteeeerike3
"I could totally eat a pig butt, if smoked correctly!"
Posts: 25331
Joined: August 5 08, 11:24 am
Location: Thinking of the Children

I'd be skeptical if it didn't put the reds as 65%+ favorites. Cueto is dealing lately and Garcia is fading. Vegas has the Cards as +125 roughly. So, underdogs, but not heavy underdogs.
Top

I'd be skeptical if it didn't put the reds as 65%+ favorites. Cueto is dealing lately and Garcia is fading. I wonder what Vegas says?

lukethedrifter wrote:A six plus inning start from Jaime would be really nice about now.

I think I would sign up for 5 innings and 2 runs.
Top