For just $45, you can pray for the president with this coin that's sold by a guy who says God told him you need the coin.

T-Mobile has spent $195,000 at Trump hotel while lobbying for Sprint merger

Sh!t, they don't even care. That's the real point.
Top

Sh!t, they don't even care. That's the real point.

I mean
From last year: 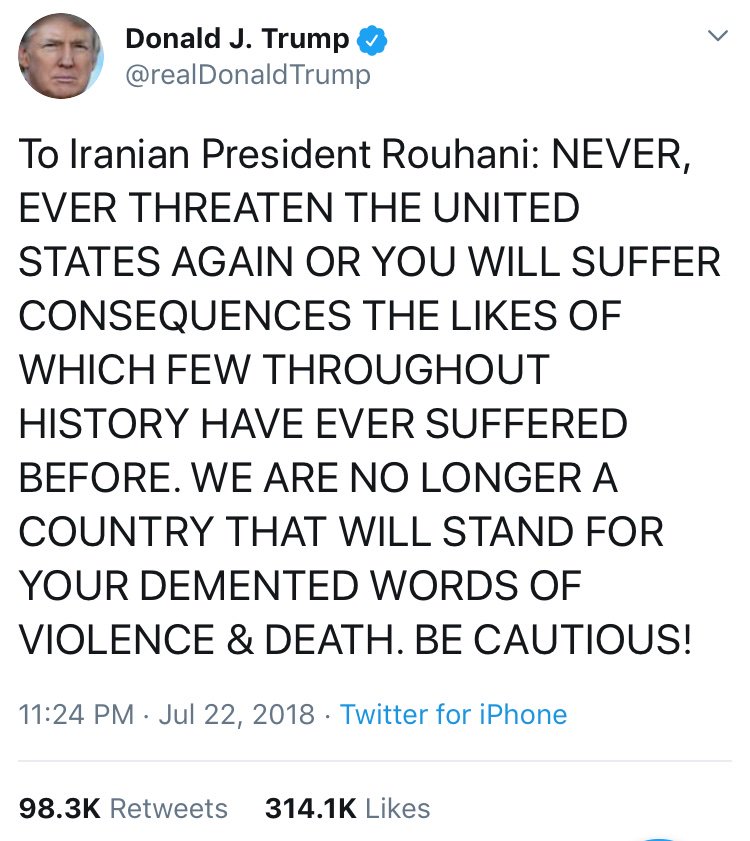 Again, the trumpists don't care. It's the tough talk that is cool. That's it. They aren't and never have thought about the consequences. If it burns down, it's all good with them.
Top

Joe Shlabotnik wrote:Again, the trumpists don't care. It's the tough talk that is cool. That's it. They aren't and never have thought about the consequences. If it burns down, it's all good with them.

If you're an Evangelical, Trump is doing more the help ban abortion than any Republican ever has. These are single issue voters he is delivering on their issue.

If you're of the white-supremacist inclination, Trump winks and nods at you constantly. He refuses to condemn you, hires your ilk in his admin, and creates a safe space for you in his Twitter and at his rallies.

If you're anti-immigration he gives you harsh treatment of immigrants and their constant demonization.

If you're a certain kind of man, you get the tough manly sounding bluster that some perceive as leadership.

If you're a wealthy corporate type, you get your tax cuts and deregulation.

That Trump has no character or integrity or much intelligence doesn't matter.

The same thing happens in liberal quarters. As an example, I have a coworker (liberal guy like me) who always insists that Rob Blagojevich got an unfair prison sentence. I disagree. Now that JB Pritzker is under investigation for property tax shenanigans he feels that that too is unfair. It's just instinctual for him to dismiss the seriousness of "his side's" lawbreaking. I have to constantly remind him that this is exactly the mindset that lets Trumpers overlook his obvious crimes. If it is wrong for Trump to cheat on his taxes it is wrong for Pritzker to cheat on his taxes too.
Top


Trump’s Golf Costs: $102 Million And Counting, With Taxpayers Picking Up The Tab

U.S. taxpayers have spent $81 million for the president’s two dozen trips to Florida, according to a HuffPost analysis. They spent $17 million for his 15 trips to New Jersey, another $1 million so he could visit his resort in Los Angeles and at least $3 million for his two days in Scotland last summer ― $1.3 million of which went just for rental cars for the massive entourage that accompanies a president abroad.

North Carolina Republican congressman Mark Meadows, a close Trump ally, dismissed the $102 million figure as insignificant. “There’s a lot more important things to worry about than the rounding errors that we sometimes have on these things,” he said.

Just as troubling as the amount Trump has spent so far on golf trips is the fact that his visits have been to his own properties — for-profit businesses that put money in his own pocket and that Trump routinely praises during his visits.