IMADreamer
Has an anecdote about a townie he overheard.
Posts: 11659
Joined: December 6 10, 1:09 am
Location: Illinois

ghostrunner wrote:Gun owners have to get charged for this kind of thing.

The parents should lose custody of the kid and get I don't know say 20 years in jail. I mean you get that for having pot on you, surely being an irresponsibly gun owner would be worth more than that?
Top

Mostly party line, but 8 Republicans in favor and 2 Democrats against
Top

The father of Avielle Richman, one of 20 first-grade students and six educators killed in the 2012 Sandy Hook School shooting, was found dead of an apparent suicide at Edmond Town Hall early Monday, police said.

The death of Jeremy Richman, 49, appears to be suicide, police said, but the office of the chief medical examiner is investigating the exact cause of death.

Richman was found by officers, who were called to the building on Main Street about 7 a.m.

“This is a heartbreaking event for the Richman family and the Newtown Community as a whole, the police department’s prayers are with the Richman family right now, and we ask that the family be given privacy in this most difficult time,” said Lt. Aaron Bahamonde, a spokesman for the department.

Richman, active on issues of mental health, had an office for the Avielle Foundation at Edmond Town Hall.

Richman just hosted an event at the Edmond Town Hall on March. It was the third one he had organized. After her speech Richman held an audience engagement session. Several Sandy Hook families attended the conference.

“He had such a clear purpose of what he wanted to do to honor his daughter,” One of the family members said. “I’m just shocked. I’m sitting in my car right now crying. The foundation was doing really important work and was doing such good things.”

Richman and his wife, Jennifer Hensel, were among the Sandy Hook families who filed a lawsuit against Infowars host Alex Jones, who long claimed on his show that the Sandy Hook massacre was a hoax.

In the past week, two Parkland, Fla., school shooting survivors died from apparent suicides, spurring immediate calls for increased mental health resources for those impacted by these shootings.

An official with the National Rifle Association corresponded with a prominent Sandy Hook conspiracy theorist to call into question the school shooting in Parkland, Florida, emails obtained by HuffPost show.

“Just like [Sandy Hook], there is so much more to this story,” Richardson said in an email dated Feb. 15, 2018 ― just one day after the Florida shooting. Twenty children and six adults were killed during the 2012 Sandy Hook shooting in Newtown, Connecticut. “[The Parkland shooter] was not alone.” The email was sent from his official NRA email address.

Richardson is a training instructor and program coordinator with the NRA. He has worked there since 2006, according to a social media post. In an emailed statement to HuffPost, he confirmed he had been in contact with Halbig and said he was asking a “legitimate question.”

“Since an individual who was prohibited from the school was aloud [sic] to pass through the front doors with a backpack containing a long gun, it is a legitimate question to ask if he had assistance concerning access to the school,” Richardson told HuffPost.

He added, “No one else seems to be interested enough to even ask the question?”

The email exchange between Richardson and Halbig emerged as part of a recent discovery process for an ongoing lawsuit between Infowars host Alex Jones and Sandy Hook parent Scarlett Lewis, who is suing Jones and his show for intentional infliction of emotional distress. For years, he has falsely called the victims of the tragedy “crisis actors,” emboldening dangerous conspiracy theorists to harass people who lost their children in the tragic shooting.

A related story from the New York Times.
Some clever lawyer eventually will find a way to wring a zillion dollars out of Jones.
Top

This is my neighbor. UGH.

I knew he had hand guns, but now I know he has an AR and is itching to use it. That's *my house* in the bottom of the pic in his screen grab.

I mean, I'm glad I have neighbors looking out for crime and all, but where the F are those bullets going to go when he inevitably misses his target as they run down the street? Right into our bedrooms! 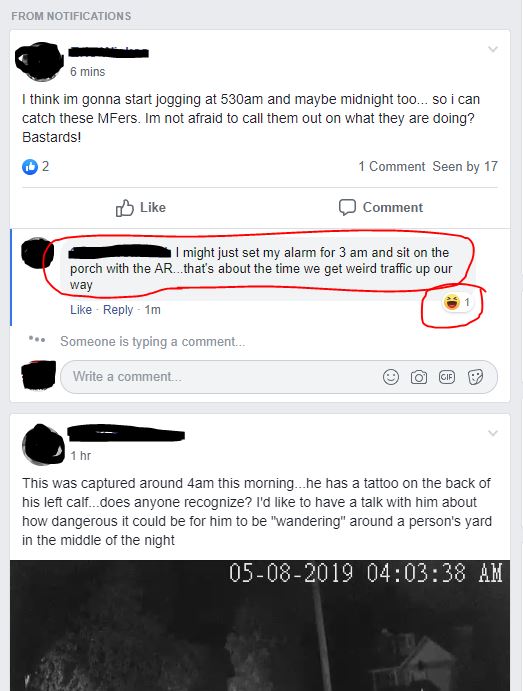 Some wacko walked into our mall the other day with a toy gun and pretended to shoot it in the food court. Then he announced that next time it would be a real gun. The idea that these incidents are random and unpredictable is false.
Top

Seeing a pic of this young kid kinda hits me.