Jocephus wrote: ↑
March 15 21, 3:03 pm
im instantly turned off by outriders since you need to sync it with a squareenix account to play

Honestly, the game doesn't do much for me. I'm more excited by the fact that GP is getting AAA from 3rd parties now. Hopefully in the future they launch something more inline with my interests.

Undertale is a bigger deal for me.
Top

This is kind of crazy:

oh [expletive] ya! i was planning on getting it but a little "eh" that i'd be paying 60 dollars and for a last gen game etc
Top

Yep. I feel exactly the same way. It's crazy Xbox is a better place to play a Sony published game. Game pass is really beefing up their sports: I expect UFC4 to drop on GP (via EA play) in the next 2-5 mos as well. I'm looking forward to that one.
Top

and strangely enough an article yesterday about how xbox is doing well with backwards compatibility and access, etc while sony and nintendo are doing poorly with that kind of stuff

then watch the trailer, it has arenado at 3rd in stl! cool ending too

Basically we're in this timeline: 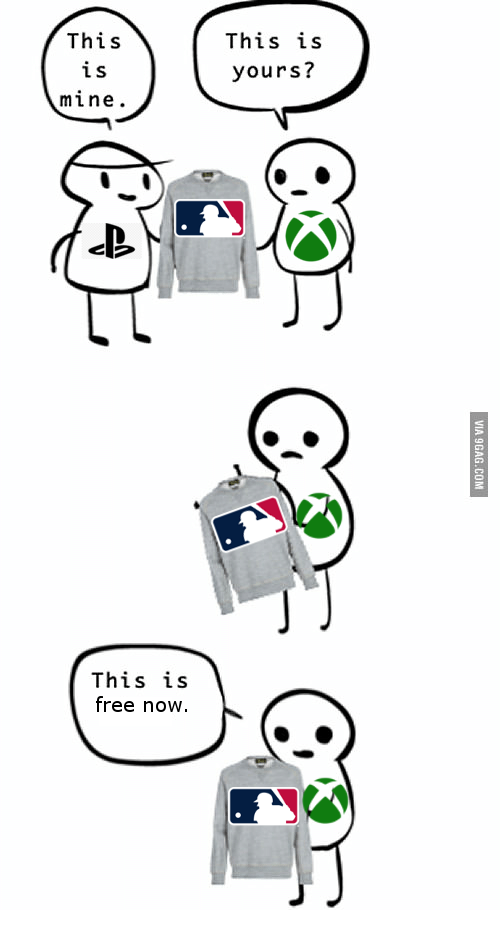 I can't wait for the Show.
Top

pre-installing mlb the show on my xbox one!
Top

You PC players out there should try out the Dyson Sphere Program. It's developed by like 5 kids in China and you build factories and supply chains and research new tech all while jetting from planet to planet.

I know there's a good amount of Star Trek nerds out there, you may recall the concept of a Dyson Sphere from ST:TNG.


Dyson Sphere Program takes place in futurist science fiction where a society exists primarily in a virtual computer space, which demands a great deal of power and computational ability. To expand that, they have sent one of their members, the player-character, into the real universe as to construct a Dyson sphere from resources in a nearby star cluster that will supply that power.

The game generates a random star cluster that includes stars and their orbiting planets and moons with various resources based on biome type at the start of a new game, and designates one planet with the more fundamental resources for the player to start at. The player, controlling a mechanized suit, can gather resources such as iron, copper, and oil; build out fundamental components such as steel plates, gears, and electronic circuits; and then combine these into building structures that include assembly plants, transport systems, and power devices. The player can start to construct factories that can generate these items automatically, making sure that the factory has sufficient power and resources to continue running automatically. Products also are used to progress research into new technologies that expand the range of components and buildings that can be made as well as the capabilities of the mechanized suit, which also must be kept powered to continue to expand production. Eventually, these allow the player to leave the starting planet and begin developing factories to harvest more exotic resources from other planets which can then be transported across the star system, ultimately leading to where the components for the Dyson sphere are constructed and launched into their target orbit.