June 9, 2011: NASA's Voyager probes are truly going where no one has gone before. Gliding silently toward the stars, 9 billion miles from Earth, they are beaming back news from the most distant, unexplored reaches of the solar system.

It's bubbly out there.

"The Voyager probes appear to have entered a strange realm of frothy magnetic bubbles," says astronomer Merav Opher of Boston University. "This is very surprising."

I hope they last long enough to give us some kind of telemetry from their conversion to V'ger.

It's really cool that we're still getting information from the Voyager probes, which cost a lot of huplah even though it was relatively cheap. They have paid in so many dividends. We try and figure out what stuff like dark matter and energy are, and every little amount of information from these probes on the edge of the solar system help us fundamentally refine these models so it might be possible within our lifetimes to figure out what that stuff really is.

We stopped dreaming. His appearance on that show was absolutely amazing. This guy understands more about how the universe works than probably everyone here combined and he still seems like a kid in a candy store and only wanting to know more. His awe and wonder of it all is absolutely amazing.

He's passionate, articulate and even during his rant, controlled. I wonder how feels about living in DC....
Top

Tyson is near the top of my list of favorite living people. It's an exclusive list, he should be honored.
Top

The Allen Telescope Array is back online — and so is its search for alien worlds that could sustain life.

The SETI Institute project, earlier backed by a millions from Seattle billionaire Paul Allen, met its initial fundraising goal of $200,000 thanks to more than 2,200 online donors — including actress Jodie Foster and author Larry Niven.

The search was shuttered earlier this year due to a severe budget shortfall. Now, the SETIstars donation page shows more than $204,200 has been donated to get the project back on track.

clevername wrote:Tyson is near the top of my list of favorite living people. It's an exclusive list, he should be honored.

Taken by NASA's Cassini robotic orbiter, the shot was captured from the dark side of Saturn as the Sun's bright rays illuminated every piece of dust and debris circling the planet. 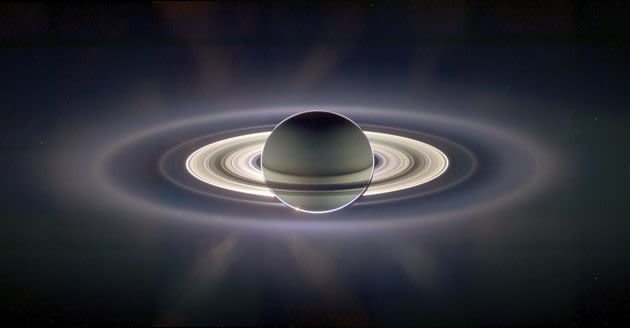