what kind of edible was it? even with legit edible options now, i don't get anything too extreme. maybe i'm not taking as much. edibles have been a calm body high for me...whereas a classic joint really rocks my head space...which at this point i'm only doing on weekends or days off hah.
Top

Jocephus wrote:what kind of edible was it? even with legit edible options now, i don't get anything too extreme. maybe i'm not taking as much. edibles have been a calm body high for me...whereas a classic joint really rocks my head space...which at this point i'm only doing on weekends or days off hah.

It was a gummy. I had one, which I think was the proper dose. I wrote (too much) about this all here somewhere. Even though it is completely legal, I felt a stigma as a newb of sorts, and didn't ask questions to the clerk. Got a lot of good info out of this thread since then.

Freed Roger wrote:A few weeks ago, I had a gummy (in OR) and it had me high as a kite. longer version

[SHOW]
Probably every person that gets there thinks they are a pioneer at first, but then you find you're not a pioneer, all sorts of friends and of course the ancients had been there.

Took a while to kick in, but it was obvious when it did. No real paranoia for me. Kind of a meta experience. Hyper conscious. Layers unfolding. The thought filter is random, but there is definitely less background noise. Would stray into tangents, but could complete thought that I started.
My sense of time and space were completely out of whack.

I took this gummy while hanging out on vast and practically private awesome beach in Oregon. Where I set up my beach base, I had a little fire going.
I felt compelled to walk around the beach, and clear my head some -i would check out a little waterfall down the bluff-side for an untold amount of time. It felt like I was a long ways and time from my base.

But I was only 100 ft gone. I walked around the water surf line. Content to watch birds and waves and what was easily accessible, which is unlike my norm, I always want to check what is over yonder. And this beach had a lot of yonder.

My instincts were with me enough to know that climbing over the rocks to next cove was a bad idea.

I would always be amazed how far it seemed I was from my base, but would look again and it was right there. As a runner I am normally above avg tuned into sense of time and distance so this kind of blew me away.

I turned on my Garmin watch to record this. Kept it on until I wandered a mile, in about half an hour. I have the map of it for posterity - a whole lot of wandering in circles. At one point, I thought it would be funny to spell out F #ck Trump on my garmin map by walking. I gave up after a while. You would have to spell it out over at least a half mile to be recognizable.

My daughter joined me on the beach to read her book midway during this. This made me a little nervous, because this high like this had never happened. But She didn't seem too concerned about how weird her dad was being.

I heard a friend say he gets paranoid when high. Though he is sort of paranoid to begin with. I wasn't too bad, save for wondering if I was freaking my daughter out, or worse that she was videoing me doing something stupid and publishing it on social media. But where was she?! I turn around, 10 yards away this time.

So I kept at it wandering around looking and thinking and being meta about what was happening. ...then I would remember little Freedette is here, and I forgot! And would turn around and only 50 feet way. I'd say Hi, she'd wave back

Anyways. After about 2 hours, I really have no idea...we went up to our place. I took what seemed like a really long ass shower, but it could have been five minutes for all I know. We had no real agenda.

I had told her that I ate a gummy and it messed me up, sorry I am acting strange. She said I wasn't really that weird. I conclude that 95% of the weird stuff is the brain circus going on. And she was really into the book she was reading and paying me no mind. I didn't offer but she expressed no interest in trying joint or gummy. She said she tried once before and didn't care for it.

In a while she drove us to closest town where she shopped and I wandered, as I started to come down.

We went to a pub for dinner, and I got really antsy and stomach was queasy. I didn't care for that feeling at all. When we got the food, and it did take them way long, I just had them wrap it up and we hit the road. And then I came back to, got over the queasy antsy-ness. We hit a tourist site on way back, Seal Caves. All was good again.

The next evening I packed the rest of the stash ~$20 worth, a pack of gummies and joint, in my luggage for the plane Then overnight, decided I didn't want to bother with it and took it out, and put it next to trash where housekeeping could take it. When we got home, and I was unpacking, there was a note that TSA had opened/inspected my bag - probably just a coincidence. The End

shorter but still long version:
I don't think the gummies or edibles are for me. Joints? undecided. I can't say they've made me really high like the gummy did, which probably makes joints more viable. As I tried inhaling more to get effect, it burnt my throat. I guess the bong is the solution there, but that is too much work for me.

If you haven't noticed, my head is kind of whirling dervish already. That living inside my own head meta experience, I really don't need that accentuated.

Where and when would I get high? Outdoorsy stuff - nah. I'm chilled out enjoying myself already. I tend to get myself pretty tired and don't need another variable. There's too much I want to see and do, and would probably not get to much of it, if I were high. In the daytime, It would mess me up and I'd wander around instead of going down a trail. If I managed to launch and head down river, no telling where I'd end up.
Also, when you have kids - even older age - I don't like being out to lunch around them. I don't mind being vulnerable, but that is too much. They see me drink a beer or two, but not drunk. I think if I had small kids around, I would have very limited scenarios for getting high.

I can see how some people enjoy it, and possibly manage it better. Getting high as a muse for artistry of any sort? - I think someone would have to pretty damn good at keeping a foot in reality, channel the process to capture what they want to create, write, or sing etc (like I tried with my garmin experience) - and then look at it later and decide what is actually enlightened vs plain ole garbage. I suspect most would fall into the latter category. But then again, we know musicians have pulled it off.

We'll see., until next time. 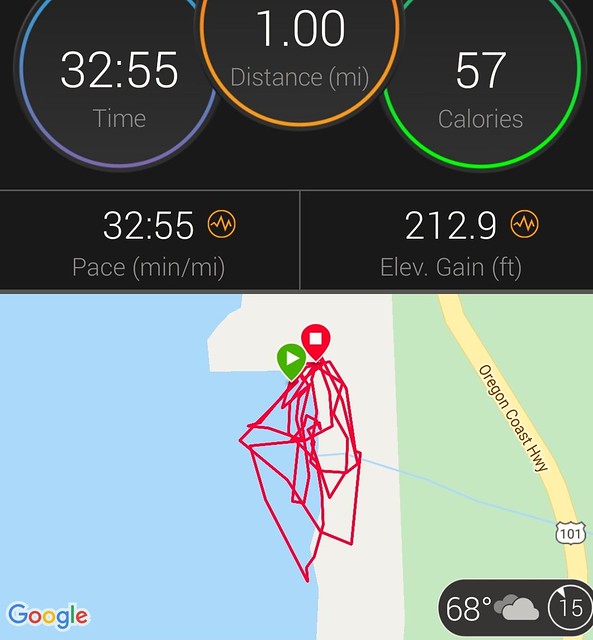 212 feet of climbing for a mile?!?, nfw, not on that beach. My garmin must have been high too
Top

I think it will happen - Get on the ballot. 150K sigs in 3 months. Jeesh, they'll get that outside a couple of [insert non-BroCo band name] concert. People with $$$ invested in this biz.

As far as whether it passes in November? That will be interesting. I