Radbird wrote:Any recommendations for selling vintage cards online? I see places like Dean's Cards but wondering if anyone used a site they were happy with.

I have a couple of 1963 Topps Mantles and suspect they are the most valuable. Not mint, corners a little worn but they look better than this one (no stain at least).

Also have some other HoFers like Mays, F Robinson, Aaron, Banks, Brock, Gibson, Yaz, Morgan, Kaline. Even a couple of Ueckers! All from early to mid 60s.

Rad, if I were you, I would get them graded by PSA. This not only confirms their authenticity to any potential buyer, it also determines their exact condition and puts them in a nice protective holder like in that picture. No matter the condition, it will certainly upgrade the value over being ungraded. I don't know what they charge nowadays, but I think I used to pay $8-10 per card for the grading - certainly worth it for anything vintage.
Top

Anyone collecting the 2017 Topps cards? I bought a few packs today, and I've already got a few swaps, including the John Goodman first pitch one.
Top

Here are a handful of Cardinals cards that I found in a shoebox of cards that I collected a long time ago. I gave the box, mostly Yankees cards, to my son for the grandkids and himself. I don’t collect anymore. I have every team and they are in team order in the box. The oldest card is a Willie Stargell card from 1977 when he was with the Pirates. That one on the bottom that is hard to read is Mike Matheney. 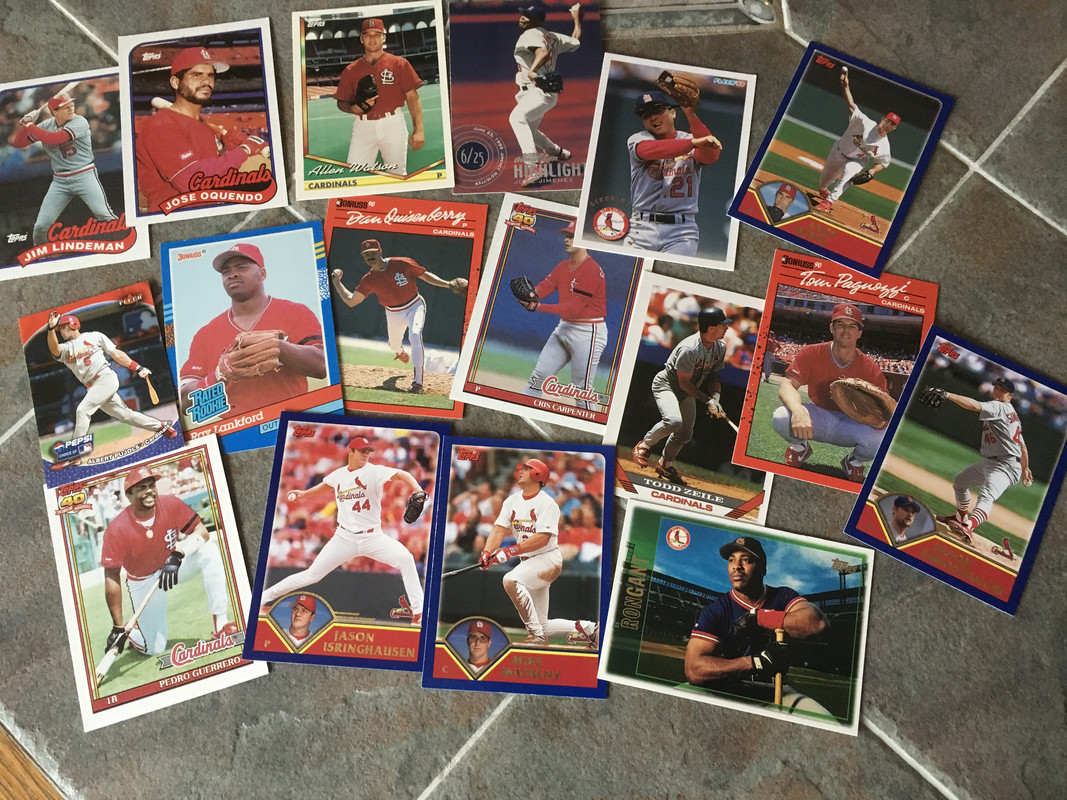 Somewhere in my parents' basement there is a sealed package of like 50 Todd Zeile rookie cards that I purchased as an investment. I hope I can retire now.
Top

zeile and lindeman for me. i could go to the moon with those.
Top

Fun stuff Corky. We had quite a collection amongst 6 brothers. All from just our random purchases. Spanned late 60s to mid-80s. After a while, a natural inheritance of the whole collection would get passed down. We used the heck out of them.

When I was real young, one brother and I played a pretend game -kind of like dolls, only using baseball cards instead. On the rug- Would make a stadium, a fence out of blocks and assorted toy buildings etc. Would put the cards in positions- and would have card hit a little paper wad around. Somehow it seemed like a real game.

I was a Reds fan before Cardinals-hopped on the bandwagon well in time to catch the Big Red Machine. Had about all those Reds cards. Several years ago we got rid of the whole collection -card condition was beat to heck. My brother priced out a few and it wasnt worth the effort to sell. (steroid era fallout price bust IIRC). He saved a few and gave me my treasured Johnny Bench card- it was a mess from being carried in my pocket. Somewhere I have it still.
Top I have these at displayed on my desk. Good conversation starters: Awesome to have those two!
Top
Post Reply
42 posts