The forum for ranting, raving, complaining and praising
Post Reply
7 posts • Page 1 of 1

Didn't want to jack the gin thread with vermouth talk. That would be crazy, if we had a tangent on GRB, right? Anyway. I love vermouth. Vermouth and Amaro are my favorite classes of potables.

Historically, there are two vermouths--Di Torino (Italian) and De Chambery (French.) Separated in style by the alps that divide the areas, and also separated by what was coming into the two port cities of Venice and Marseille--the spices and such arriving in the countries differed, so the styles differed.
Dolin - French - Chambery = Drier, more wine-y.
Cocchi - Italian - Torino = More botanical, richer, sweeter.

The Chambery impacted the Torino more than the other way around as far as what we drink now. Here's the Italian Peninsula in the 15the Century: 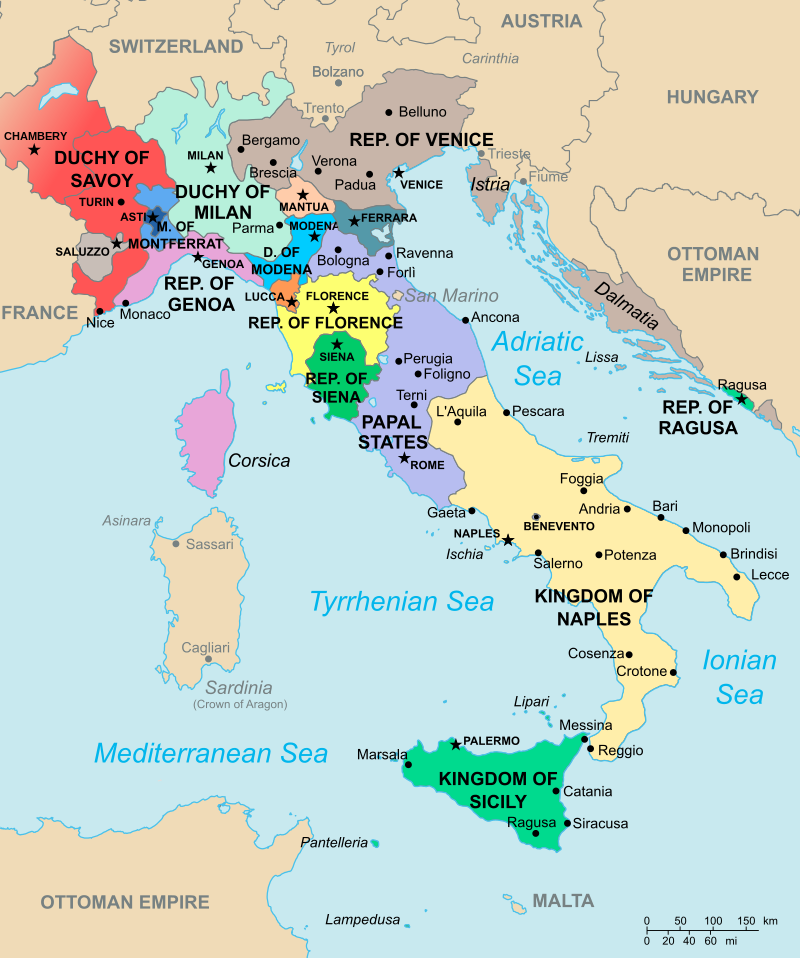 The French start [expletive] with the Duchy of Savoy real hard in the early 1500s, so he moves his royal court from Chambery to Turin. This isn't a huge move--if you look at Google Maps directions from Chambery to Turin it's not even a 4-hour drive, but the two places are divided by the alps and this mountain barrier was important to the Duchy for defense and is important to the history of vermouth because of trade routes. When Chambery came to Turin, the Piedmontese tradition of aperitif and digestif drinks, much heavier in Chambery/Piedmont than Turin, came with them. We get Antonio Benedetto Carpano, blasphemously credited on his Wikipeida page for inventing vermouth (Hippocrates wrote about wormwood pre-Christ, the Greeks invented the stuff and the Romans spread it around Europe, then the Savoy/Turin folks perfected it and Carpano was just one of them) who was the first to trade it. That's the important contribution of Carpano--first to widely trade it and market it.

Then, bummer, phylloxera comes and wipes out wine production in Europe. Somewhere between 2/3 and 9/10 of European vines are gone. Wine production grinds down to a tiny fraction of what it used to be. They couldn't make wine, so they couldn't make vermouth. So they take Abenstia Artemisium (wormwood), which is required to call the thing vermouth, and they distill it to absinthe and they drink a lot of absinthe until wine grapes come back.

As a side note it's interesting to think about how much historically happened to slow or halt our cocktail culture.
1. Phylloxera -- this happens in the late 1800s when cocktail culture is taking root in places like NY, Chicago, San Francisco, and then vermouth is gone.
2. Prohibition -- this happens from 1920 - 1933 and we don't have any legal booze (save, like, Fernet Branca, distilled in Tribeca and sold in pharmacies)
3. WWI and WWII -- distilleries in the US and Europe are required to make rubbing alcohol and other items for war efforts. Or in the case of Amaro Montenegro (lost from 1941-46) and others, they're gone because the distilleries get bombed. Booze production at a halt.
We effectively had a half-century of external stuff happen to stop us from drinking spirits and/or good cocktails.

If I were building a fridge full of vermouth ("Always keepa you vermouth inna da fridge"--Giuseppe Gallo) or stocking a home bar I'd start with the three Dolins and the Cocchi, throw in the Antica for sipping, add a Punt e Mes for drier/more bitter cocktails or mixing w/ bourbon. The Spanish make lovely vermouths and have a tradition of drinking the stuff as a pre-dinner thing--they have Vermouth Hour in Barcelona, not Happy Hour. Due to another of their traditions--butchery and charcuterie--their vermouths tend to have a meaty/savory/saline quality that is pretty enjoyable. Miro, Yzaguirre, Atxa, they're great, though not really required for cocktails at home, just if you like drinking vermouth and want a fun twist.

Vermouth is also GREAT as a stomach relief and is worth having in the fridge if you have tummy issues like I do. If you're having a little indigestion or heartburn or overate a bit at dinner a shot or sipper of vermouth, on the rocks with an orange peel, is a wonderful thing (second only to a 15mg gummy or a handful of Tums.) The Romans, gluttons that they were, drank copious amounts of the stuff after feasts to cure their bloated guts.
Top
Online

AWvsCBsteeeerike3
"I could totally eat a person if it were a life/death situation"
Posts: 24827
Joined: August 5 08, 11:24 am
Location: Thinking of the Children

I have nothing to add, but that was very informative. Thanks.
Top

AWvsCBsteeeerike3 wrote:I have nothing to add, but that was very informative. Thanks.

AWvsCBsteeeerike3 wrote:I have nothing to add, but that was very informative. Thanks.

As i posted in the gin thread, I must like vermouth somewhat because i love Negronis. Really fond of the aperitif/digestif types of cocktails.

Bought a bottle of something other than M&R but can’t remember what right now. Haven’t tried it straight.
Top

Fun cocktails you can do w/ vermouth as the primary rather than secondary ingredient.

VERMUT PREPARADO (huge in Spain after church on Sunday and before lunch)
2 oz Sweet Vermouth
1/2 oz Dry Gin
Orange slices
Put the above in a tumbler (not as big as a collins, it will be too watery) w/ some ice, tucking the citrus slices along the sides, add soda water to top it off.

JULIA CHILD MARTINI (a martini that won't get you too turnt)
Just flip the martini backwards and go like 2.5oz dry vermouth and 1/2 oz gin. Garnish with whatever you like, olive or lemon peel.

Not only are these lower in ABV and won't get you all blotto, they're cheaper to drink at home since a bottle of Dolin Vermouth is like $12 retail.
Top

Vermouth on tap everywhere you go is one of my favorite things about Madrid.
Top
Post Reply
7 posts • Page 1 of 1