How good is Yadier Molina, really?

Bill James' HOF Monitor and HOF Standards give an interesting perspective on Molina's candidacy because his scores in those two measures are so different, which I think reflects how hard his vote totals are to anticipate. His HOFm is past the point where basically everyone gets elected (Todd Helton pending) unless there are PED concerns, but his HOFs is also past the point in the other direction where the BBWAA almost never elects anyone. 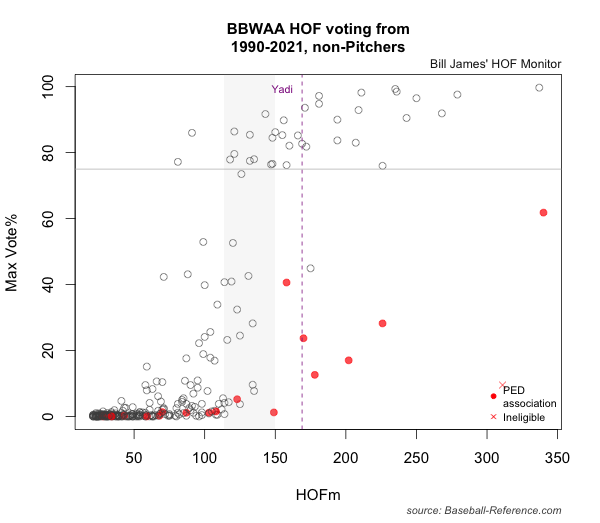 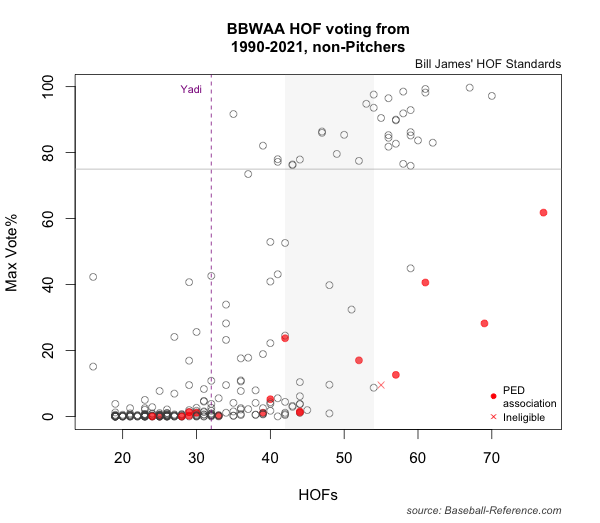 *note: the graphs include players still on the ballot, so some of the points will move upward if the player gets more votes in future years

HOF Monitor is only slightly better at predicting vote totals than HOF Standards, so when they disagree so sharply it still makes sense to consider both (the HOFm graph above looks like it has a clearer relationship to votes, but the pattern is visually exaggerated by the upper end not being capped in the same way as HOFs so that the surefire HOFers stretch out for half the x axis; if you stretch out the right side of the HOFs graph it looks pretty similar). HOFm's predictive advantage is also smaller in recent years, and it wouldn't surprise me if it is no longer a better predictor for current voters, similar to how James' Cy Young prediction formula doesn't work that well anymore. I think HOFm and HOFs are both a bit outdated for how a lot of modern writers evaluate players, but they still give an interesting look at how slightly different perspectives can make a big difference in how you evaluate Molina.

The two most similar players to Molina in terms of high-HOFm/low-HOFs (169/32) are Nellie Fox (163/32) and Brooks Robinson (152/34). Both also have kind of similar overall profiles to Molina (though Robinson was a better hitter). Robinson sailed in on the first ballot while Fox had to wait for the Veterans Committee (he fell 2 votes shy of induction in his final year on the BBWAA ballot). Either of those outcomes seems plausible to me for Molina. Voters have publicly been bullish on him, but the voters who talk publicly about their ballots or supported candidates tend to be more generous with their votes in general, so it's hard to tell what his overall support will be based on that, and there have been plenty of players who were openly talked about as future-HOFers during their careers whom the BBWAA never ended up electing. Catcher defense is also probably the area where player evaluation trends are changing the most right now, which makes it harder to predict how voters will view Molina's career (and those of his contemporaries) in 6 years.
Top

bob
Is Yadi the next catcher going to Cooperstown?

Jay Jaffe
Joe Mauer will hit the 2024 ballot, which looks to be four years ahead of Molina if the latter sticks to his plan to retire after next season. I don't know that Mauer will be a first-ballot guy but he'll go in soon

He's more confident on Mauer than I would be. He'll be an interesting case. Obviously one of the best players in the league at his peak, but the peak was pretty short and he was essentially done at 30.

Still, a .302/.388/.439 career slash line for a guy who was a decent fielding catcher for most of his career is pretty impressive.
Top

I think voters will be divided over Mauer's Head and Shoulders ad for decades.
Top

I don't know if he ever signs autographs or not, but if he shows up for even one scheduled appearance he'd be better that that lame-0 Ziele.
Top

It seems that one of the most important and most BS parts of HoF entry--the press building the 'Hall of Fame catcher' narrative is already done ('catcher' in this case). I've heard it several times in opponent broadcasts.

I'm all for it, if that sounds a bit too cynical.
Top

I think voters will be divided over Mauer's Head and Shoulders ad for decades.

I got to admit, that right there is about all I know about Joe Mauer.
Top

In terms of Cardinals all-time franchise position players, is Yadi third behind Stan and Ozzie? If you were lining up statues, would Lou go before Yadi? Would Albert still sneak in there?
Top

GeddyWrox wrote: ↑
October 12 21, 7:24 am
In terms of Cardinals all-time franchise position players, is Yadi third behind Stan and Ozzie? If you were lining up statues, would Lou go before Yadi? Would Albert still sneak in there?

Albert gets a big one. No one tops the decade he had here and DeWitt will work with Moreno on the service time crap and find a loophole. He better anyways. Buy Artie a nice boat with a bow on it.

Yadi before Lou. Behind Stan and Ozzie. They were iconic. Yadi has counting stats. Ozzie could have mustered another couple of years. Probably could have been in MLB instead of Cal Poly too. He was a league average hitter in 1996 still.

Honestly would have gotten more if he was just a Yankee DH/1B platoon versus lefties only.
Last edited by Big Amoco Sign on October 12 21, 7:48 am, edited 1 time in total.
Top
Post Reply
131 posts